Are you looking for an exciting aerial yoga studio with experienced teachers, a class for beginners (little to no experience), & one that is affordable? 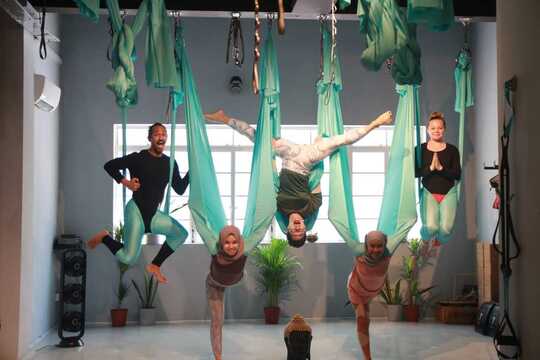 AERIAL FITNESS & YOGA CLASS WITH HAMMOCKS = INTERESTING, & ALWAYS DYNAMIC!
In Singapore, there are a number of aerial yoga studios conveniently located in the central are such as suntec city mall, raffles place, orchard shopping centre, armenian street, & lavender street, & few others that includes yoga mala. But did you know that each aerial studio will have their main focus, & that there are only a handful of studios that are dedicated towards aerial fitness &  an aerial fitness studio is what we happen to be.

What is an Aerial Class?

An aerial class is a form of suspending oneself in the air using silk hammocks or a specialised piece of custom made strap, which allows students to perform yoga poses, pilates based movements, lots of stretching, movement, tractions, inversions, tricks & different levels of difficulty by manipulating your handling & body positions around the fabric. An aerial class is a great way to have fun, sweat the calories away, strike that pose for that Instagram post. Our aerial fitness studio cater mostly towards the crowd of beginners with little to experience, that are keen on learning & getting fit with using silk hammocks, under the guidance of highly experienced teachers, which means you will get plenty of support, tips & safety instructions during any session here.

What is an Aerial Yoga Class?

While there are plenty of traditional yoga studios & classes in Singapore, they don't necessarily offer aerial yoga class as an aerial class needs another branch of expertise with teacher/ instructors with high level of knowledge to deal with teaching aerial in a yoga format, which is another set of additional cost altogether. Also, during a typical floor based yoga session, you don't require as much stabilisation as compared to an aerial yoga class as you're on flat grounds. Transitioning from one yoga pose to another using a hammock is another level up your usual yoga classes, as it challenges more of your core strength, grip, balance, thus making even a simple pilates movement, or a yoga pose quite challenging working more muscles groups, yet fun as everything else feels new. Imagine the feeling of being suspended, & floating, doing yoga moves such as downward dog, shavas, warrior poses, & other stretches in the air, your mind & body will be on constant excitement!

What is an Aerial Fitness Class?

Now that you now what yoga aerial is, we come to where our expertise are, aerial fitness. Even if we have a strikingly similar movement during our aerial fitness class, it's just like how you would find an exercise that looks similar to a yoga move but named & done slightly different. We are an aerial fitness studio, not an aerial yoga studio, thus our class are slightly dynamic in nature, combining fitness with aerial silks, which provides a new set of challenges & emphasis, as compared to how your body works during a typical workout in a fitness class. With a workout that offers you a whole body engagement by a combination of stabilising the spine, inversions, hand-eye coordination, plenty of core muscle work, to give you the best aerial fitness class.

​Most aerial fitness studio will tell you that inversions are still a big part of a class, & if you haven't done any form of being inverted from just hanging upside down, the upside down motion of it may cause giddiness & that is perfectly normal as your senses are now wondering what just happened. It will pass after a few more tries. If you are ready to spice up your yoga classes into a visit to best aerial fitness studio, hurry & join us in the next class to avoid being in our waiting list. Look out for our class bundles.
ready to learn more? click here!
Aerial FAQS
Benefits may include one or more of the following:
Increased / improved

Lowered/ decreased
Did you know that private group sessions are cheaper than attending a class? Contact us today